By changing LTP to model SS benefit taxation correctly,  an average group of SS beneficiary's save $ 1,853 per year in excess benefit taxes resulting in nearly $ 150K additional plan balance (in Todays dollars) .   In this simulation, the additional tax savings is enough to keep the retirement plan solvent for another 5 years.   Note there are other scenarios, illustrated below, that result in a greater tax drag than above example.....not an insignificant result.   YMMV.
Please consider voting for this IDEA.  Add your comments and thoughts as well.
THE ISSUE:
For some levels of income, LTP's simplified SS benefit tax model overstates SS tax expenses in the plan.  This means higher withdrawal levels from investments (to cover over-stated taxes) resulting in an overly conservative plan and possibly plan failure.
There are two differences between SSA and Lifetime Planner SS benefit tax calculation:
1.   Combined Income Calculation
LTP "Combined Income" =  Total user reported SS benefit assumption (Simplified)
SSA Combined Income =  MAGI + 1/2*SS Benefit  (Correct)
2.  Benefit Subject to Tax Rate Table
LTP uses this "total user reported SS benefit assumption" x a flat rate of 85% to determine how much SS benefit is subject to tax (Simplified)
SSA uses combined income applied against a progressive rate table to determine how much SS benefit is subject to tax.  SSA rate table below.  (Correct) 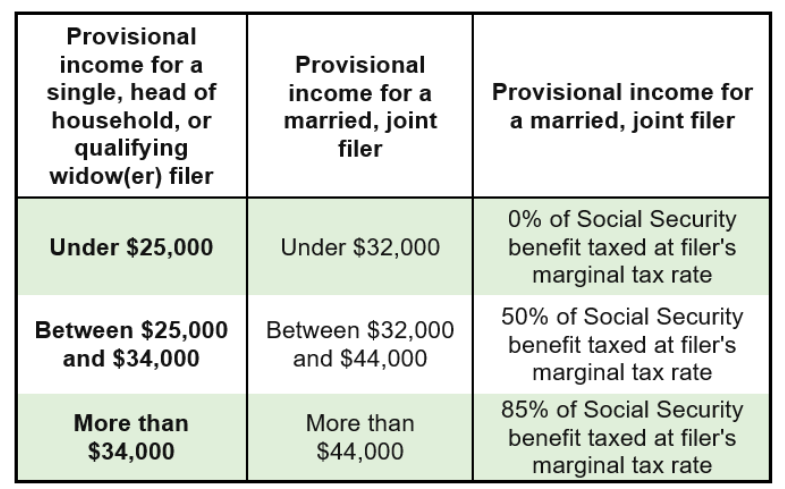 Is LTP SS benefit tax model good enough?  Depends on level of your combined income!
To get a feel for the difference between current LTP model and the proposed SSA tax models, 4 scenarios are presented below.  Expand the images by clicking or opening it in a new browser tab.
The long and short here is to show how varying income levels result in tax expense differences between each model.   Note in Scenarios 1, 2 and 3 the SS benefit was fixed at $32,000.   FWIW....The spreadsheet is mine but there are a number of good online tools that do this SSA calculation quite well.
SCENARIO 1
SS benefit only resulted in an excess of $ 3,264 per year taken as SS benefit taxes in LTP over the SSA model. 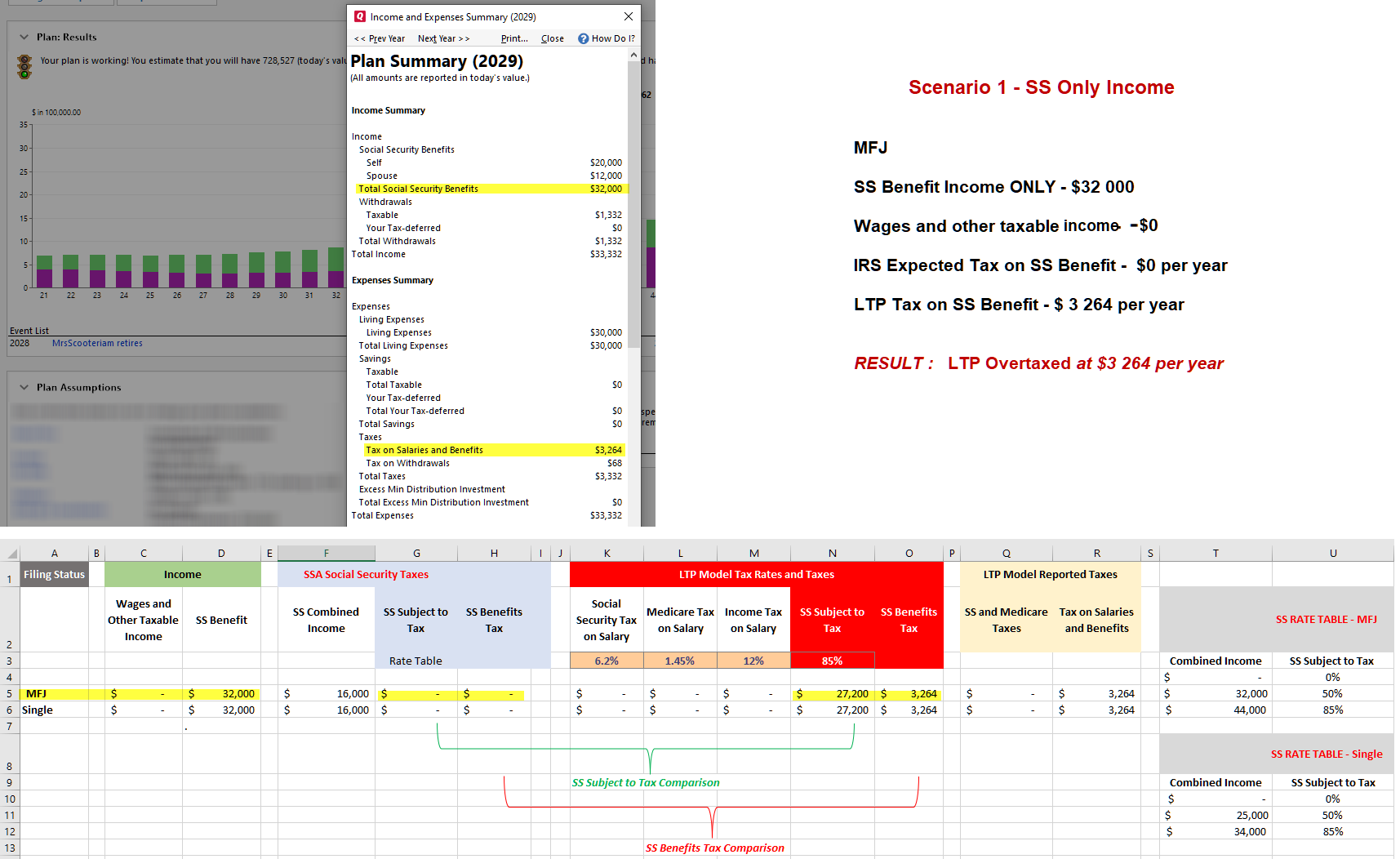 SCENARIO 2
Additional AGI added to SS Benefit resulted in an excess $ 2,340 per year  taken as SS benefit taxes in LTP over the SSA model. 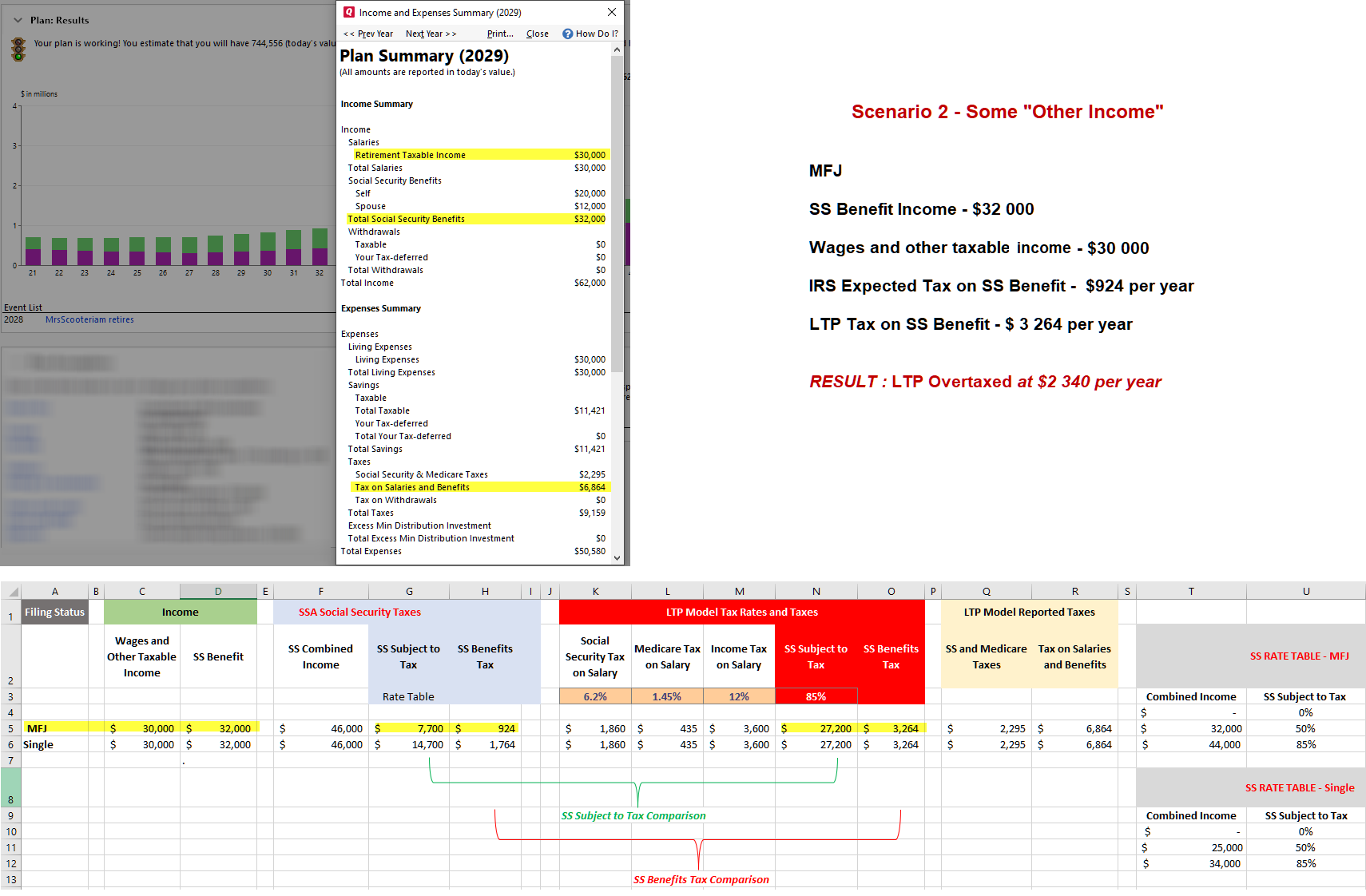 SCENARIO 3
Break-even case where both LTP and SSA models agree. This particular case assumed $52,941 in AGI.  Note greater levels of AGI does not have any effect on taxes due to 85% limit. 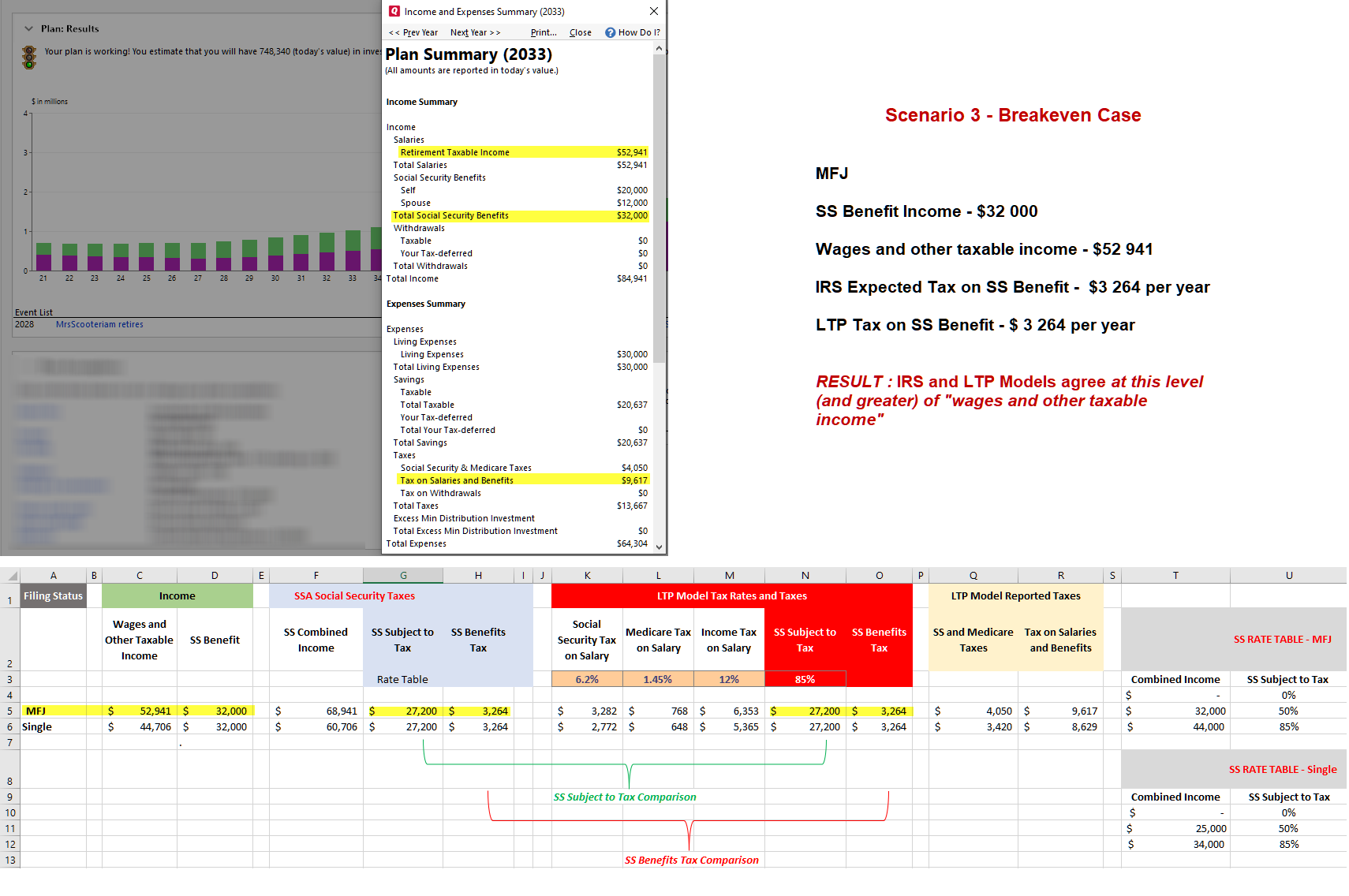 THE BENEFIT:
For the LTP user with combined incomes shown in Scenario 3, both SSA and LTP models result in the same tax on SS benefits.  That is, above a certain combined income, 85% of benefits are taxed and LTP's simplified model is correct.  Note, currently the maximum amount of SS benefit subject to tax is 85%.
However, in Scenario 1 and 2, users with lower levels of combined income show that LTP is significantly over-stating the tax on SS benefits as shown in the scenario graphics.   While YMMV, this drag has the effect of significantly lower than expected end of plan balances.
To illustrate further using SSA stats.....
According to SSA, just under half of all SS recipients in 2020 pay no tax on their benefits.  For these users paying no tax on benefits,  LTP's model is overtaxing this SS benefit tax and thus reducing end of plan balances.   By how much???   It varies!
Additionally,  SSA reports 2020 average SS benefits are $ 18 170 per year.  Using this average benefit amount and assuming that all average benefit recipients pay no tax on benefits, Scenario 4, below, indicates that  LTP would overtax that user group by $ 1 853 per year!

Over the retirement plan horizon, in my simulation, this can result in a reduced end of plan balance by as much as $150K in todays dollars.  That's enough to fund retirement by another ~5 years.
To illustrate, I set SS benefit at the average,  $18 170 and varied AGI from $ 0 to $ 22,915, a level of combined income just below the taxing threshold.   Scenario 4.
SCENARIO 4
LTP Model Overtaxing SS Benefits for the "Average"  SSA Benefit Recipient 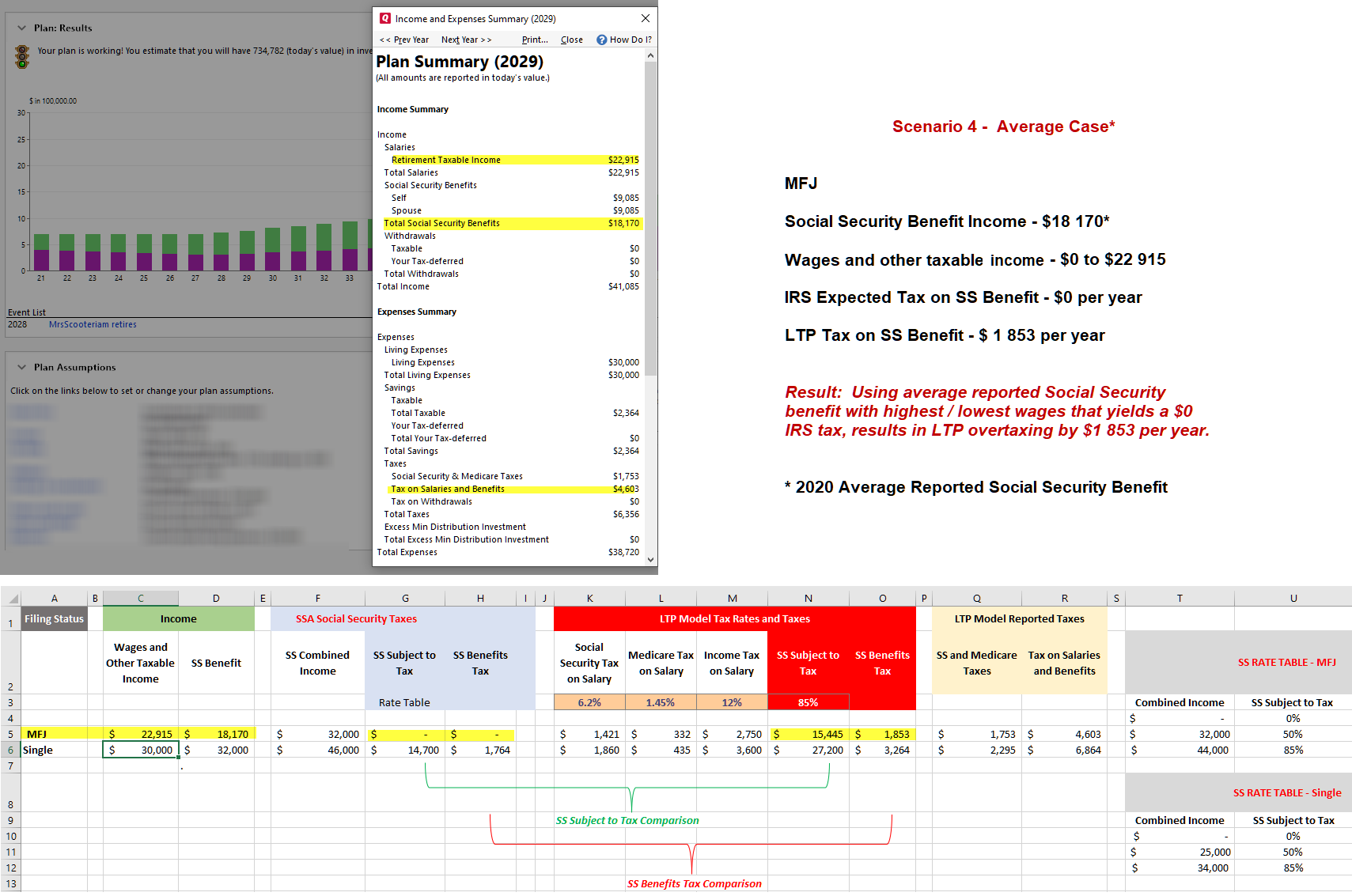 Yes, I realize conflating those two stat. populations may not be 100% correct....that is, assuming that average beneficiaries also pay no benefits tax (because there are other things that make up combined income).    Yet, IMO, Scenario 4 figures are not unreasonable.    But it is clear from Scenario 1, 2 and 4 that there is a drag on plan results resulting from the LTP model.
THE CHANGE:
1.   Change the Social Security benefit tax model in LTP to align with SSA tax rules.  Specifically implement SSA "combined income" calculation and apply this against the published rate tables to determine how much of the SS benefit is subject to taxes.  This new model would replace LTP's current, simplified 85% of total SS benefits subject to tax.
2.   Break-out in the Plan Summary tables,  in two separate line items, "Tax on Salaries" and "Tax on Benefits".
3.   Update and maintain new model in LTP.   Consider licensing 3rd party tools (v. building) to minimize update efforts and user impact due to lack of proper attention/priority to tax law changes.
4.   Update and maintain relevant HELP topic(s).
Please Consider Voting for this IDEA.  Lots of SSA and tax savvy folks here....add your comments and thoughts as well!
REFERENCES:
IRS Summary on SS Income Taxation