BUG? Investing Allocation by Security Chart Misclassifying Security as "Other"

Scooterlam SuperUser, Windows Beta Beta
May 2019 edited May 2019 in Investing (Windows)
I was looking for an exportable portfolio value report for my portfolio visualizer account and found what appears to be a bug or inconsistency between the graph portlet (Investing>Allocations>Allocation by Security) and the report produced from the same graph.  See image 1.
Basically, VWINX (a Vanguard MF) is incorrectly grouped under "Other" in the portlet (right side of image 1), whereas in the report, it is properly broken out, as expected (left side of image 1).
I checked to ensure that Account and Securities filters were set the same in both cases. They were.  As for the security in question, it appears to show up correctly in the Security Detail View shown in Image 2.
Have you seen this issue?  Can you replicate?  Known bug?  Workaround?  Am I missing something?
Scott
2019 QW HBR R18.15
Image 1 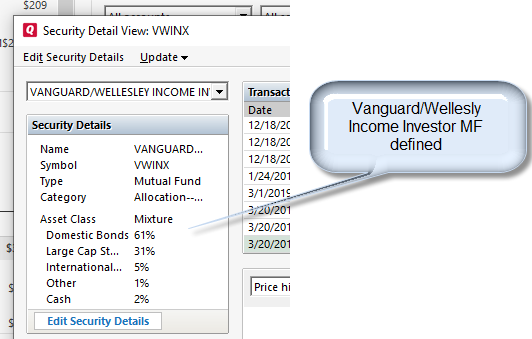