How does your Quicken Windows performance compare?

Chris_QPW Member ✭✭✭✭
July 2020 edited May 2022 in File Conversion and Backup (Windows)
From what I have seen the "power" of the machine has very little to do with the performance of Quicken.  I'm not really surprised by this since it is mostly a single threaded process and processor speeds for a single core have been about the same for many years (desktops around 4GHz).
People come in and tell how they have these very new/powerful computers, and most of the time my system has better performance than their (mostly because they are having some kind of performance problem which is related to their data file, financial institution, or maybe even their high powered GPU and high resolution screen).  But I doubt that any of these systems even when working right will change the performance of Quicken very much.

Anyways I thought I would put in the a couple of systems I have for comparison.

Size of external data file 134MB (no attachments).  Below sizes for Quicken data file, plus memory of Dell Latitude below. 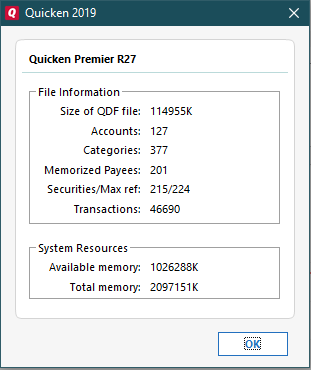 Dell Latitude D620 (made in 2006).  Memory and changing to a SSD are the only changes to this laptop (no discrete GPU).  This is a laptop I just keep around for mostly for testing, just because "I have it". 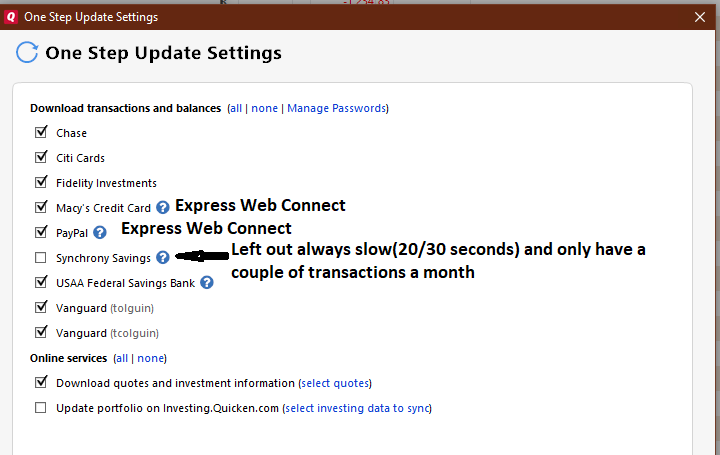 System I built in 2012.  Only differences for Quicken sizes below.

Open the same investment account again: 2 seconds (or less, hard to select and time at the same time)

My wife has another system I built that is a bit newer than mine, and that is Intel, but its "Quicken performance" is so close to my main machine that it isn't worth even throwing in the to comparison.